Although 30 September 1981 is scarcely a memorable date for most investors, it has a special place in the annals of modern financial history. It was the date on which the yield to maturity on the US 10-year Treasury note hit its highest level since the creation of the Federal Reserve in 1913.

The high level of long-term yields 40 years ago was the result of drastic monetary policy tightening by the then Chair of the Federal Reserve, Paul Volcker. Determined to combat the stagflation that dominated the economic environment during the 1970s, Paul Volcker raised the federal funds rate to 20%, an all-time high in modern financial history. This was the starting point for an unprecedented bull market in both equities and bonds that has continued to the present day. 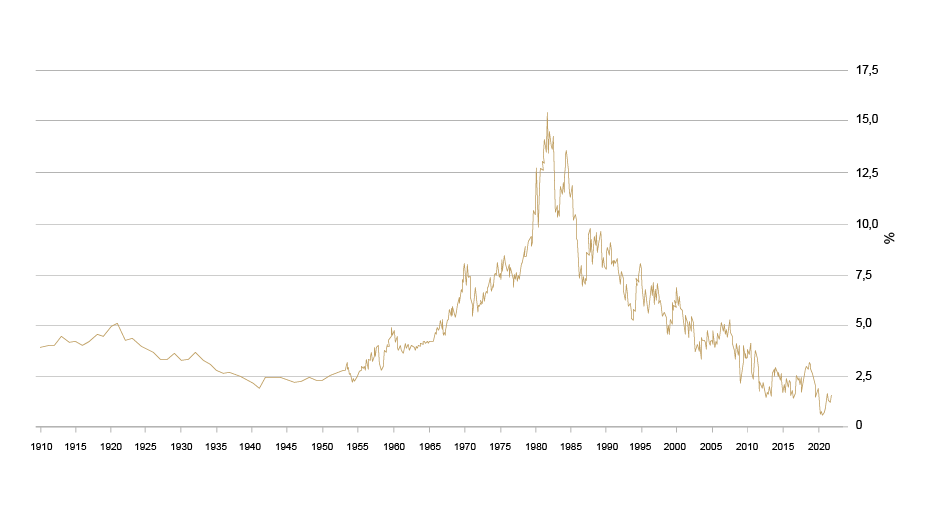 Source: US Department of Treasury, Macrobond

The beauty of the bull market over the last 40 years stemmed not only from the high returns of investments in equities and bonds but also from the low volatility of a portfolio combining the two main traditional asset classes. The negative correlation between equities and government bonds in times of economic decline or stock market corrections meant that the appreciation of government bonds partially compensated for losses in the equity component. The only major scare was in the financial crisis of 2008, when the nosedive in equities was much steeper than the appreciation of government bonds, such that a defensive investment profile combining 30% equities and 70% bonds temporarily suffered a maximum decline of around 15%. Apart from during this crisis period, the combination of 30% equities and 70% government bonds offered a similar risk to a pure bond portfolio in terms of volatility and maximum loss, while the return generated over time was higher.

Today, the starting conditions on the financial markets are diametrically opposed to those of 40 years ago. After three decades of increasingly expansionary monetary policy, the S&P 500 index is trading at a multiple of 24 times earnings, roughly three times its level 40 years ago, while the yield to maturity on the US 10-year Treasury note is just 1.5%, compared to a high of 15.8% on 30 September 1981. Now, with equities being expensive and bond yields so measly, working out an asset allocation to construct a potentially rewarding and reasonably volatile portfolio has become extremely challenging.

On 23 November 2012, Dylan Grice, at the time a strategist at Société Générale, published a final paper for the French bank before embarking on a new professional adventure [1]. In it, he suggested the idea of a 'cockroach portfolio', an analogy with the extraordinary survival capacity of this much-abhorred insect. Compared to a mere 50,000 years of human existence, cockroaches appear to have been around for 350 million years, having survived the last three mass extinction phases of the earth's history. These insects are capable of surviving more than 30 minutes' immersion in water, resisting lethal radiation 15 times better than humans, enduring freezing temperatures and even going for a month without food (which rarely happens to them, since they can eat almost anything). And yet, unlike humans, cockroaches are not sophisticated creatures but primitive animals with a non-complex organism that requires little to live on and whose only response when attacked is to flee. But maybe it is this very simplicity that explains why cockroaches are among the most resistant and robust species that have ever existed on earth.

Like the insect, the cockroach portfolio is characterised by a demystifying simplicity. It is half-composed of real assets, which tend to appreciate when the general price level rises, and half of nominal assets, which tend to perform better when prices start to fall. Each half of the portfolio is then split in two again, distinguishing between productive assets (beneficiaries of flourishing capitalism) and non-productive assets (favoured when the cracks in the capitalist system start to escalate). The result is a portfolio with equal shares of the four major traditional asset classes: equities, government bonds, gold and cash. Such a portfolio is deemed capable of survival whatever economic scenario prevails, be it inflation, deflation, stagflation or depression. Table 1: Outlook for asset classes depending on price trend and economic scenario

Equally weighting a portfolio between the four traditional asset classes is to some extent a default option when probabilities cannot be assigned to the various potential economic scenarios.

Since the end of the dollar's convertibility to gold, this type of portfolio has posted a risk-return ratio broadly in line with a traditional defensive portfolio composed of 30% equities and 70% government bonds. Lower performance between 1981 and 2021 was offset by higher performance during the 1970s, when gold was the only one of the four traditional asset classes to outperform inflation. 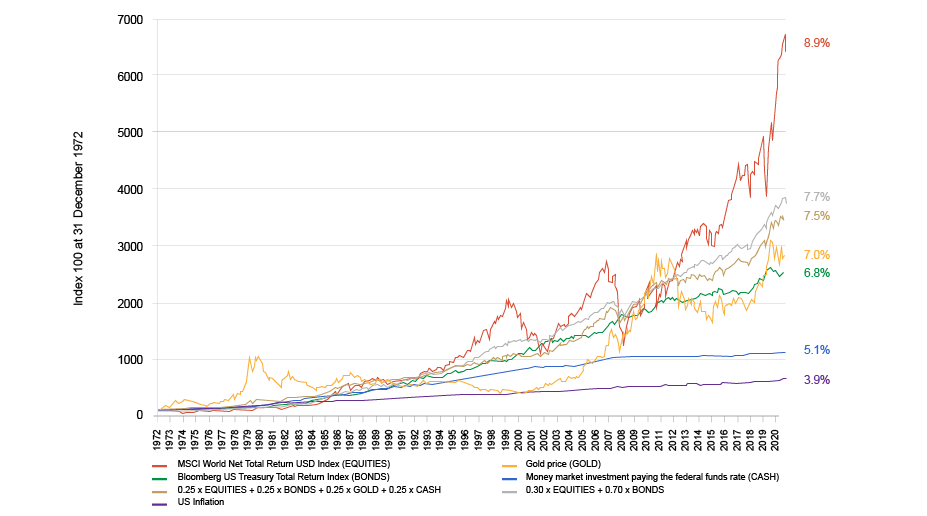 Source: BLI, Bloomberg, Lipper, monthly data. Note that under no circumstances should historical returns be taken as expectations of future returns. On the contrary, future returns are likely to be very low due to the strong appreciation of almost all financial assets in recent years.

An equally-weighted portfolio currently makes all the more sense as the decoupling of economic fundamentals and financial markets, resulting from massive central bank intervention, makes any forecasting exercise even more uncertain. The risks of stagflation and depression have increased considerably with the gradual weakening of the monetary and financial system since the collapse of Lehman Brothers in autumn 2008. The system should have been reformed several years ago, given the extent of the imbalances it was going to generate. But so far, the public authorities have decided otherwise. Despite the financial and social distortions that have been created, the defective form of capitalism continues.

New core structure for the BL Global 30, 50 and 75 profile funds

Over the years, changing economic and financial circumstances have inevitably impacted the management of the BL Global 30, 50 and 75 profile funds. Launched on 28 October 1993, the funds were initially composed of the two main asset classes: equities and government bonds. Government bonds benefited from disinflation and behaved inversely during equity market corrections, with capital gains on bonds partly offsetting losses in the equity component. Those were the good old days of booming capitalism. Since the bursting of the US real estate bubble and the collapse of Lehman Brothers investment bank, deep cracks in the monetary and financial system gradually led us to adjust the core allocations. The current result is shown in Table 2. The main adjustments are as follows:

This core structure is obviously only a reference framework since actual allocations may deviate considerably as economic and financial circumstances evolve. Nevertheless, we believe that adjusting the core structure leads to risk-return profiles that are more appropriate for the current situation, compared to the traditional structure based exclusively on the two major asset classes of equities and government bonds.

Table 2: Reference allocations for the BL Global 30, 50 and 75 profile funds

The site uses cookies. They help secure your connection, facilitate your navigation and the development of statistics.